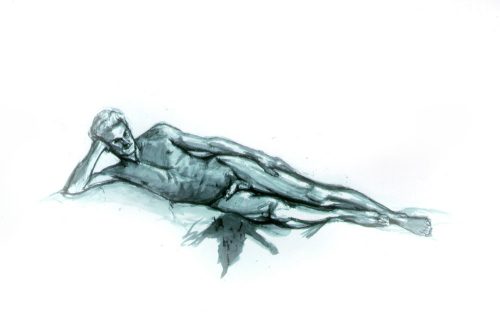 Camberwell was at this time probably the best Foundation course anywhere. As a niave schoolboy I expected it to be all bohemian and about finding myself as an artist. I could not have been more wrong. It was a rigorous introduction to the craft of making art and very regimented (we were required to attend both day and evening classes and weekend museum visits). I had the usual things you might expect such as drawing and painting from life but so much more. We were grounded in everything from ceramics (which I had already studied at school) to textile design, from sculpture to printmaking… even calligraphy. This was probably the happiest year of my life. I also ‘came out’ in the first term promising I would never again hide after leaving school where I’d been badly bullied for years.

I’ll remember in particular the head of the course Dick (Richard) Lee . He looked like the retired navy man he was but was quite a bohemian at heart. He interviewed me and was a brilliant supporter of ‘odd ones out’ as well as being great fun. His collaged ‘Notices’, portraits of staff who were doing tutorials in Camberwell were brilliant witty constructions assembled from junk. The other tutor I remember most was Jonathon Leaman. Jonathon was a talented student Dick had brought in to teach drawing. His passion and encouragement to really ‘feel’ it as a medium was truly inspiring, and still is (he shows with Beaux Art). In a very different way, Martin Smith , who was the ceramics tutor was influential as well. His considered, serious and technically exacting approach to craft made me aware for the first time that art is craft before it is anything else. The ‘anything else’ was covered in the fantastic art history lectures by Oriana Baddeley . As a library obsessed schoolboy I devoured art books so these were a complete delight. Her invited speakers included a male art historian (I think John Nash 1927-2013?) who placed Vermeer at the pinnacle of subtlety for the hidden meaning in Low Countries art. That lecture that made me a narrative symbolist artist: I call mine humanist parables, the antithesis of Christian morality tales, which brings me to Mario Dubsky (see link) who got my thinking in order about queer things. At the time there were about 30 of us on the course; today I’m told there are 300. I doubt the course can be anywhere near as good with that number. 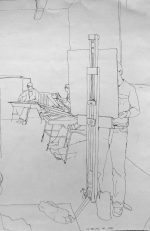 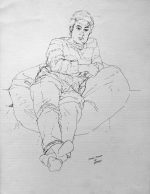