Following on from researching the collection of British erotic illustrator Bill Ward and the subsequent history of LGBTQ artists involved with Brixton Artists Collective for Tate Archive I’ve begun a much bigger project. I am always frustrated that LGBTQ artists work is routinely pigeon holed to Pride week events or AIDS anniversary shows. Usually these are programed by homosexual curators and often with little or no institutional funding. When it is given a serious outing it is usually merely as a ‘side room’ in wider exhibitions addressing issues around sex and eroticism or social history. The feeling that you walk into a cul-de-sac, a dead end that no one knows what to do with but includes out of curiosity value, is depressingly familiar. Personally I believe there are more interesting points to be made about the work made by those not in the ‘0’ category of the Kinsey Scale or viewed by them (that’s not a minority at all by the way). To be frank about it I think the homosexual context is at least as important and, if you focus on the outsider status that our sexuality conferred, possibly more important than heterosexual orientation in driving modern art. That makes me an extremist in many eyes but I’ll happily sit with Kate Millet rather than Norman Mailer. 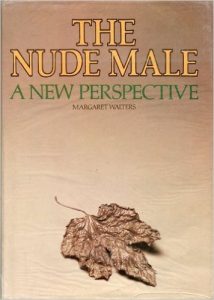 The pioneering work in the field was probably Margaret Walters The Male Nude (1978). This study brought the focus on the nude back from the female to the male, but from a feminist perspective. Avoiding the usual tropes of male gaze, that assumed female nudes were inherently about beauty and the viewer was male, she addressed women artists’ and gay artists’ approach and looked at how their world view affected the results. She also delineated the uses of the nude, as symbols for instance or as commercial objects of desire in a completely novel way.

Next up was Emmanuel Cooper’s ground breaking study The Sexual Perspective (1986). This only takles the art of the 20th Century in the west but was one of the first books to openly ‘out’ artists whose sexuality was considered unimportant in most historical and art studies. It seems extraordinary now that many of the artist, figures such as Rosa Bonheur, Charles Demuth or Jean Mammen should have been a revelation to gay artists such as myself but such was the silence regarding ‘difficult’ sexuality that they were under the counter names. In fact the underground knowledge about artist who were gay was one of the themes that struck me then and now. A kind of gay family tree linked us. I met Mario Dubsky who had known Keith Vaughan who knew John Minton. We pass on our underground oral history in a way other artists did not. 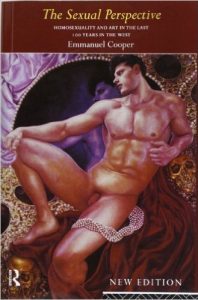 Now I know there are plenty of books out there on homosexuality and art but again and again they come back to either sex or biography. Particular periods get covered (the Wilde circle or American photographers of the 1970s  say) but a deeper understanding and mapping of the subject is necessary if it is to get proper recognition and a reason to value it beyond sex, AIDs and gender. Exactly what that might be is the subject of my ongoing research, involving initially detailed timelines of world LGBTQ art and artist from 1750 to today.

Many of the artists mentioned by Cooper are still routinely de-sexed in curated exhibitions and monographs (take for instance Joan Eardley). Others, such as Keith Vaughan, a major British painter who ticks every book in the list of things to do before you get a Tate retrospective, still hasn’t had one. It is said the reason is specifically that he is a one theme painter – the theme is the pastoral male nude – not sufficient to earn him the accolade. If you think that in todays more liberated times this cannot really be a divisive issue then I recommend reading Michael Petry’s Hidden Histories: 20th Century Same Sex Male Lovers in the Visual Arts (2004) in which he analyses the forces at work in the art circuit that work against recognising sexuality and what role it might play in the way work that both of us make is often not invited to the table. Even more instructive is his account of the tortuous process of bringing the exhibition the book accompanied to the Ferrens Art Gallery in Hull: a process mired in bigoted obstruction by the local council (see Gender, Sexuality and Museums: a Routledge Reader). A similar process accompanied the breakthrough show in America Hide/Seek at the National Portrait Gallery (2010) in Washington, one that the curator has repeatedly spoken of in terms of outright refusals, cowardly denial and homophobia from a raft of institutions who refused the topic.

I have to say that even many of my contemporaries are oddly circumspect about acknowledging their sexuality outside a queer event. Apart from conversations with them, it was interesting to me how many dropped or retitled the Brixton Shows they participated in, or removed the ‘gay & lesbian’ part of the title in their online CVs. I don’t believe this is about concern not to be seen as a ‘single issue’ artist (why exhibit in a queer show if so?) but as evidence they think the issue might hinder their career. The idea that it somehow “doesn’t matter anyway” is often trotted out but would never be used, say, when considering Picasso or Renoir. Michael is ever optimistic, always looking forward and relentlessly references matter-of-factly the play of sexuality in current work he writes about. He curates an annual Pride show for Clifford Chance which I myself have exhibited at. What interests me in my own writing is the historical context. My plan is to find other reasons than what one does with genitals to value the sexuality of artists via the context of their times and their wider associations. You can see from the above that I most definitely do believe it is central to my own artistic practice.