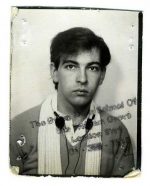 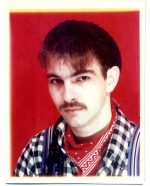 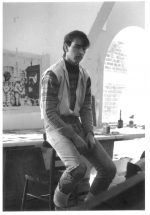 In the Print Studio

With Nick Balaban and Geraldine Walsh 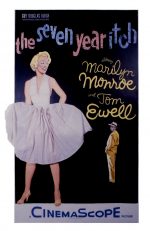 The innovative independent Art School founded in the early 1900s, Byam Shaw had an open studio policy that suited my inability to fit into categories marked ‘painter’ or ‘sculptor’. Most art schools at the time made you choose one or other with cross-media working tending to be discouraged. Their studios allowed you to move between them. I was in the ‘Image Studio’, and worked on collage, painting and mixed media installations.

Most of my work addressed gender and sexuality, much of it poking fun at traditional archetypes. Amongst the staff I particularly valued were Robin Klassnik, of Matt’s Gallery fame, and Peter Kennard, the man who put cruise missiles in Constable’s ‘Hay Wain’. My fellow students included Nickolas Balaban, the partner of designer Ossie Clark, and Kim Wayaki. For our final year show we picked adjacent spaces and showed as three out gay artists. My main piece was a two metre high subversive version of the movie poster for the Seven Year Itch: standing in front of it a hair dryer blew up her skirt revealing carefully modelled hairy legs and a sheer pants with a penis. Edited sound track had her say “Did you like the movie… it was a bit scary wasn’t it? Oohh! Do you feel the breeze from the subway?”.  An invitation to Emmanuel Cooper (author of ‘The Sexual Perspective’) resulted in our first review entitled ‘Three Likely Lads’ in ‘Mister’, a soft porn magazine.

At the time I was living in ‘soulfull’ Dollis Hill with three other gay gays. One evening in the Salisbury pub on Charing Cross Road I met Rod McRae who had just arrived from New Zealand to try and break into the British children’s book market (the drawing shown below shows him work on one). Stuck in a hostel he asked if I wanted to get a flat and, desperate to get away from home in suburbia, we found a grotty ground floor flat in a 1930s semi near the tube. He invited his friend from New Zealand Brent Millar who brought in his friend an anarchic American actor from Baltimore, Steve Elm. It was while I was living there I met Richard Ayre my partner, now husband. Steve teaches drama back in the USA, Brent sadly died but Rod is now a leading sculptor in Australia.